"Strange Light" by Larry Niven is a small press publication by DreamHaven (www.dreamhavenbooks.com). At 23 pages, it has 3 vignettes including a Draco Tavern story.

Thanks to Ron Brooker for letting us know!


Fleeing the supernova chain reaction at the galactic core, the cowardly Puppeteers of the Fleet of Worlds have -- just barely -- survived.

Theyve stumbled from one crisis to the next: the rebellion of their human slaves, the relentless questing of the species of Known Space, the spectacular rise of the starfishlike Gwoth, the onslaught of the genocidal Pak. Catastrophe looms again as past crises return -- and converge. Who can possibly save the Fleet of Worlds from its greatest peril yet?

(And in which we learn that the Ringworld was *not* Louis Wu's first epic adventure.)

Which is all by way of announcing that BETRAYER OF WORLDS, Larry and Ed's latest book, is now available.

Among Edward M. Lerner's most popular novels are his Fleet of Worlds series of collaborations set in what colleague Larry Niven calls Known Space. Known Space brims with strange aliens and exotic locales, making it a great setting for storytelling.

But below the radar, Lerner has been constructing his own star-spanning stage. "Dangling Conversations," the original InterstellarNet novelette -- about the Search for Extraterrestrial Intelligence (SETI) and First Contact -- ran in Analog in 2000. Related stories appeared in Analog, Artemis, and Jim Baen's Universe. Call them tales of Un-Known Space.

But magazine issues go out of print, and readers kept emailing Lerner to ask where they could find one story or another. He has had no good answer --

Until now. Expanded, updated, and merged, five related stories have become the novel InterstellarNet: Origins. Opening on Earth in an era much like our own, the story rapidly expands into an open-ended star-spanning future history.

We are not alone. Now what?

Life changed for physicist Dean Matthews -- and everyone else on Earth -- the day astronomers heard the radio signal from a neighboring star.

First Contact brought more questions than answers. What were the aliens saying, and what did they want? What could humanity hope to gain -- and what did we risk losing -- if we replied? Did we dare trust one another? Did we dare not to? And who had any say in the matter?

By sorting out all that, Dean changed lives again. This time across two worlds.

And in the process he set the stage for crises yet more daunting that would bedevil his family -- and an expanding number of interstellar civilizations -- for generations to come.

"Edward Lerner takes us from a first SETI detection to full scale interstellar net economics, with thrills along the way. No one had thought through what a working interstellar net would be like. Lerner has the professional heft to make sense of it, tell a story, and make us care. Good stuff, told in clear, quick prose. A groundbreaking job!"


Larry Niven and Steven Barnes will be making an appearance at the Wyrd Con convention on June 11-13, 2010!

Both authors will be participating in a Dream Park panel and then they will have a signing.

Steven Barnes will be leading Tai Chi Saturday and Sunday mornings of the convention.

For more information about the convention or to register for the event visit the Wyrd Con website!

The third book in Ed and Larry's Fleet of Worlds series was released on November 10th. Here's some of the early buzz:

What remarkable aliens? Puppeteers, of course. Also Pak, Gw'oth, and a wholly new species, the Drar.

For more about the latest Known Space, see what the publisher has to say or Ed's blog posting.

My latest near-future thriller -- this time dealing with medical nanotechnology -- was released on October 13. A new book's release is always exciting, but this release is doubly noteworthy. That's because SMALL MIRACLES is this month's "SCI FI Essential" title.

And what is that? "SCI FI has teamed up with Tor Books, the largest publisher of science fiction and fantasy in the world, to spotlight some of the best new science-fiction novels, from both new and established authors.... Each month we select a new book as a SCI FI Essential. That means it deserves to be counted among the finest works of the genre."

And to top off that endorsement, here are some early reviews:

"From its explosive beginning to its explosive finale, Small Miracles is fast paced and very high tech and reads like a Michael Crichton novel. It is extremely intriguing and provocative; I couldn't put it down, especially during the last fifty pages when so many lives were in danger. The epilogue is wonderfully downbeat and open, letting the reader know that the real nightmare has just begun."

"I was royally entertained. For the duration of the book, I was convinced I understood nanotechnology.

" 'Miracle: an event or act that breaks a law of nature -- especially one attributed to a deity.' Well the miracles in Edward M. Lerner's new book may be small ones but they fit the definition in that they definitely aren't natural -- which could be a problem. When God makes a miracle it is a wonder; but a man-made miracle can as easily be a blunder. We are only human after all ..."

 Brian Lumley Grand Master of horror and author of Necroscope

"Lerner shows what it might be like to live in times of artificial intelligence. An entrancing and frightening novel."


Larry Niven and Jerry Pournelle were at the Mystery and Imagination Bookshop in Glendale, CA on February 21 to sign books, including their latest collaboration, Escape from Hell. The authors were also interviewed by Warren James for Hour 25 Online. Pictures and full details in this File 770 article.


Edward M. Lerner, sometimes Niven collaborator (Fleet of Worlds, Juggler of Worlds, and the forthcoming Destroyer of Worlds), has a new solo novel. His latest book is FOOLS' EXPERIMENTS, a near-future technothriller about artificial life, artificial intelligence, and world-threatening hubris. In a nutshell: "We are not alone, and it's our own damned fault."


Just a quick note to let you know that Larry Niven has graciously agreed to be the author Guest Of Honor for our upcoming convention, SheVaCon 17.  It will be held at the Holiday Inn Tanglewood, Roanoke, Virginia.  The dates are Feb. 27-March 1, 2009.  Further info can be found at our web site:  www.shevacon.org 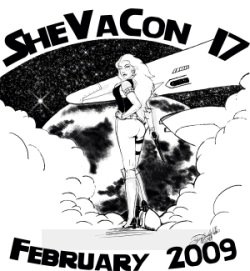